May 7, 2015
By Canadian Chiropractor staff


May 7, 2015By Canadian Chiropractor staff 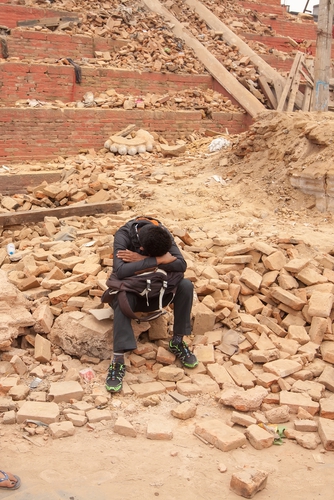 Ruins at the Durbar square in Kathmandu Nepal after earthquake My Good Images / Shutterstock.com

The forty-two-year-old resident of Phopa Chaku, a small village in Dolakha district east of Kathmandu, was in an open space, away from the mud-brick structures dotted throughout his village.

His five-year-old son Gopal, however, remained in the family’s home as the earthquake’s aftershocks continued with terrifying frequency.

Nanda rushed into the house to rescue the boy, who is now safe and sustained only minor injuries. As the family’s home collapsed, however, Nanda bore a share of the structure’s weight.

He now lies in a bed in the foyer of Bir Trauma Centre, Kathmandu’s primary critical care provider, and cannot move from the shoulders down. His head remains in a fixed position.

According to Nanda’s nephew Kumar, in the quake’s aftermath members of the village banded together to take Nanda to the district headquarters of Charikot, where he was able to hitch a ride with local police to Kathmandu to seek medical care.

Among the estimated 14,000 injuries incurred as a result of the April 25 earthquake, which measured 7.8 on the Richter scale and has so far resulted in 6,200 recorded fatalities, approximately one in three (or around 4,700) will require follow-up rehabilitation treatment. Of this number, approximately 12 per cent have damage to their spinal cord.

According to Dr. Ganesh Gurung, who is coordinating operations at Bir Trauma Centre, Nepal neither has the human resources nor medical facilities to deal with the needs of those suffering spinal injuries, making the delivery of such resources critical to the wider relief effort.

“The number one need now is spinal cord rehabilitation – human and medical resources related to that are the most important because we do not have those kinds of resources,” said Gurung, emphasizing that as the relief effort moves from search and rescue and immediate medical relief, so too must the resources being offered.

The World Health Organization (WHO) has been coordinating with Nepal’s Ministry of Health and Population to deploy foreign medical teams to areas that lack access to services, or whose medical infrastructure was destroyed by the quake. The United Nations health agency is calling all donor agencies and emergency relief partners to make the long-term needs of affected populations a priority, and ensure spinal care and rehabilitation is taken into account.

“The treatment and proper handling and care of those injured are essential to prevent future disabilities,” said Damodar Adhikari, program manager at WHO Nepal Earthquake Response, adding, “If the people are not properly cared for, spinal cord injuries could lead to paralysis.”

According to Dr. Roderico Ofrin, WHO’s overall health response manager in Nepal, spinal care has been identified as a critical medical gap, and is being flagged for funding, reflecting WHO’s long-term commitment to the health and welfare of the Nepalese people.

“We are working in four major hospitals in the Kathmandu valley, supporting the medical teams once a patient has been discharged, and ensuring the right care and equipment to address spinal cord injury is provided,” she said.

Handicap International is supporting spinal cord injuries in hospitals. The agency said further human resources and equipment are being sought by Kathmandu’s Spinal Injury and Rehabilitation Centre to ensure the adequate provision of long-term care.

For those such as Nanda Thami that were injured in the quake, the delivery of such care will ensure not only their own health, but also theirs and their family’s future economic security.