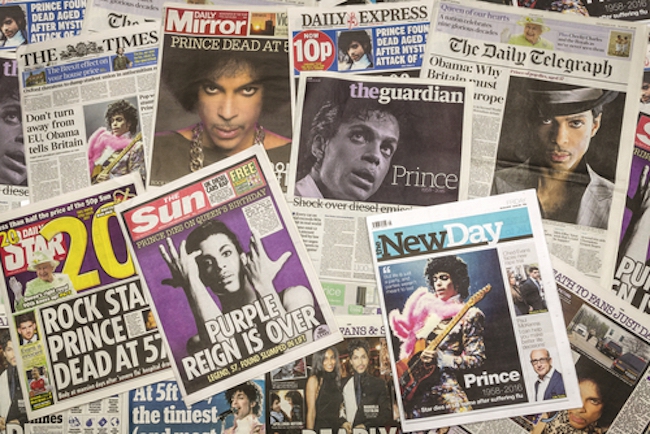 The world was shocked when news of the death of yet another legendary music icon broke last week. Prince, who was well known for hits like “Kiss” and “When Doves Cry,” was found dead in his home in Minneapolis.

Results of initial investigation into the death indicate the pop star may have died from an overdose of prescription painkillers, according to news reports. Unnamed sources privy to the investigation revealed that prescription drugs were found in Prince’s Paisley Park home in Minneapolis.

By now we have heard that a week before his tragic death, Prince may have suffered an overdose of Percocet, or a similar opioid pain medication, while flying home from a concert. This caused the plane to make an emergency stop in Moline, Illinois, and paramedics to administer a shot of Narcan, an opiate antidote, according to an article posted in The Guardian.

Since his death, media organizations have cited sources close to the 57-year-old “Purple Rain” maker, saying Prince had been suffering for years from hip and knee pain. It’s easy to imagine this to be true given this high-heels-wearing superstar’s elaborate concert performances and jaw-dropping dance moves.

Prince’s true cause of death has yet to be officially released, but speculations and reports linking opioid overdose to his tragic ending bring to light an important issue that analysts are calling a public health crisis: the unprecedented increase in painkiller prescriptions, use and abuse.

If initial reports about Prince’s death are to be confirmed, we can add him to the growing list of famous talents taken from this world by similar means. But the number of celebrities killed by opioid use in North America is only a small fraction of the tens of thousands of people who have died from prescription painkiller overdose. The U.S. Centers for Disease Control and Prevention reported 47,055 drug overdose deaths in the U.S. in 2014 alone. Since 2000, overdose deaths involving opioids increased 200 per cent. The 2012 Canadian Alcohol and Drug Use Monitoring Survey found approximately 410,000 Canadians reported abusing prescription drugs, including opioids. High-dose opioid dispensing across Canada has jumped 23 per cent from 2006 to 2011, according to a report from researchers at St. Michael’s Hospital in Toronto and the Institute for Clinical Evaluative Sciences.

Abuse of prescription painkillers is a growing epidemic that needs serious attention, not only when huge celebrities are involved. With the increasing prevalence of chronic pain among adults and the continued indiscriminate prescribing of high-dose pain medications by physicians, we can only expect the opioid crisis to persist.

There has to be a better alternative than handing patients prescription slips to ease their pain. There is an abundance of good evidence out there pointing to non-opioid alternatives to pain management.

This spate of unnecessary deaths should be a long-time-coming wake-up call to physicians to engage in evidence-based, multidisciplinary approach, if necessary, to safely and effectively managing chronic pain. Anything less than that is just not going to cut it.