Honouring the legacy of a chiropractic statesman. 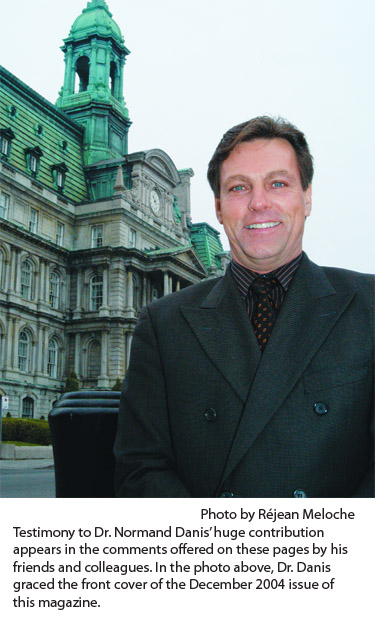 On April 14 in Montreal, Quebec chiropractors paid tribute to a man who had protected, defended and promoted them for over two decades. After just a few months of illness, Dr. Normand Danis was dead at the age of 52. He left vacant the important position of president of the Ordre des Chiropraticiens du Québec (OCQ), the regulatory body that oversees the province’s nearly 1,100 chiropractors.

Chiropractic leaders from across Canada joined mourners in the Église St-Laurent where the funeral service was conducted for Dr. Danis. Apart from being a family man and a clinical chiropractor, he was undoubtedly the most influential person in the Quebec profession’s modern-day development.

After practising for seven years in the Montreal area, Dr. Danis was invited in 1987 to take on the OCQ presidency, a role that he carried out with vigour, courage, vision and dignity.

He was twice named ACQ’s Chiropractor of the Year, and was honoured with Canadian Chiropactor magazine’s award of the same name in 2004. A fellowship was bestowed upon him by the International College of Chiropractors, and in 1998 Dr. Danis was a recipient of the CCA’s prestigious Medal of Merit.

“I have been with Normand for the past 12 years on the Quebec board. Normand has made me a better man in every aspect of life, especially as a chiropractor, as he has made better all the people that he met during his 20 years as president of the Ordre des Chiropraticiens du Québec. I will not talk about his accomplishments as this would take too many pages. All I will say is that Normand elevated everyone he met to be better individuals.”
Dr. Richard Dussault
Secretary-Treasurer, Ordre des Chiropraticiens du Québec

“We travelled across Canada together for 15 years, at least two or three times a year.  Stories about those trips – I have thousands. We made quite a team together … and, as we say, what happens on the road stays on the road. And he kept telling me, ‘Board meetings are mathematics, Daniel. Make sure you count the votes around the table.’ In more than 20 years of working together, we never had an argument. We were always on the same wavelength all the time; we always came to a consensus. You could have asked both of us the same question and you would get the same answer.”
Dr. Daniel Saint-Germain
Secretary-Treasurer, Canadian Federation of Chiropractic Regulatory and Educational Accrediting Boards
(From the eulogy he delivered at Dr. Danis’ funeral service)

“Dr. Normand Danis will stand in our memory forever as a champion of chiropractic in Canada. It is important for you to know how many close friends Normand has in every province of this country and how loved he was. At the federal level, he was a champion of professional unity, of co-operation, and of ensuring Quebec’s place at the table. When we faced our most challenging regulatory issues at the federal level, we turned time and time again to Normand. And he never failed us. His word was accepted by the leadership of the profession across this country. His contribution cannot be denied and will never be forgotten.”
Dr. Keith Thomson
President, Canadian Federation of Chiropractic Regulatory and Educational Accrediting Boards

“Normand was my junior at CMCC, so our relationship goes back 30 years. Those of you who knew him know that his love and passion for chiropractic was equivalent to his love and passion for life. He is today rejoicing after a few months of deep physical suffering. Let’s choose to live our purpose as a tribute to a great man who at the tender age of 52 leaves us a legacy of joy, truth, passion and compassion.”
Dr. Gilles Lamarche
President, College of Chiropractors of Ontario

“Dr. Danis has been a giant for the chiropractic profession. His knowledge and understanding of chiropractic as a whole have been matched by very few in the last 20 years.”
Dr. Christian Beaudry
Longtime friend of Dr. Danis

“Dr. Normand Danis’ years as president of the Ordre des Chiropraticiens du Québec could perhaps be described correctly and explicitly in a 300-page book. I will attempt to do it here in a few sentences.
“Dr. Danis should be remembered as a truly remarkable North American chiropractor. His continuous work with the Quebec regulatory board demonstrated the breadth of his leadership in political activities, administration, and research and guidelines development. One of his best qualities was the surgical capacity to analyze situations and come up with efficient solutions. He always put principles first before action. He sought to bring innovation into his profession, and excellence was his only objective.
His accomplishments, dedication and expertise, in a 20-year span, are unprecedented in Canada. His departure will be a great loss for the whole chiropractic profession as well as for his family and close friends.”
Dr. Daniel Boisvert
1st Vice-President, Ordre des Chiropraticiens du Québec

“Three words for a great man and a giant doctor of chiropractic: perseverance; unification; confidence. Perseverance: A tireless worker, stubborn, patient, he never calculated the hours, the days, or even the number of months necessary to reach his goal, which was to build a better profession, a better chiropractic world for all of us and for the public at large, our patients. Unification: Despite the different opinions against him or around him, he always succeeded in having us around the table, working and reaching a consensus. He was a great and powerful debater. You had to be very solid to have him change his opinion. Once done, he was your best ally. He was the expression of a true leader. Confidence: He was always successful in the critical and fearful times to have us reach deep inside our core to regain confidence and power to win our battles or simply to advance, one inch at the time, on a painful day or mission. I remember him saying, ‘André-Marie, a chiropractor never quits in the face of an obstacle. He continues his work with intensity and faith, and he will win.’  How many times I saw this phrase in action, and how many victories were obtained. And today, I still use this phrase, and it works. The program in chiropractic at the Université du Québec à Trois-Rivières (UQTR) is just one example.”
Dr. André-Marie Gonthier
Professor, Clinical Sciences, Chiropractic Program, UQTR

“Dr. Danis spent the last 27 years of his life breathing the philosophy, science and art of chiropractic. Recently, he worked so hard with all of us to create the Quebec Chiropractic Research Chair at the Université du Québec in Trois-Rivières, of which he was so proud.  I am so happy that he was part of this inauguration.
“I lost a great friend, a great supporter, and the profession lost a ‘chiropractic master.’”
Dr. Guy Beauchamp
President Fondation de Recherche Chiropratique du Québec (Quebec Chiropractic Research Foundation)

“For the past 20 years, I have had the pleasure of working for Dr. Normand Danis, chiropractor, president of the Ordre des Chiropraticiens du Québec. During the course of these years, I have witnessed him to be a diligent, passionate and devoted worker who dedicated his life to the chiropractic profession. Lastly, my colleagues and I are unanimous in saying that Dr. Danis was a very good boss.”
Denise Giguère
Administrative Secretary, Ordre des Chiropraticiens du Québec

“Dr. Normand Danis left us too soon. With focused passion, he lived a committed life for his family and his profession, and achieved remarkable results in both endeavours.
“As president of the Ordre des Chiropracticiens du Québec, he pro-tected the scope of chiropractic practice within Quebec by assisting in the battle to retain diagnosis within the scope, he oversaw the regulatory issues that arose within his province, and he contributed to the establishment of a strong national chiropractic federation of regulatory oversight. In each of his interactions and along with his ever-ready personal warmth and humour, Normand consistently provided high-level statesman and leadership qualities, keen insight and an innate ability to find solutions to complex and challenging issues. Among his many responsibilities, he also co-chaired the Guidelines Development Committee for the past number of years, which produced the recently released clinical practice guideline on adult neck pain not due to whiplash, a state-of-the-art milestone in the process of guideline development.
“Dr. Danis served the profession as few have, and his contributions have become a foundation upon which the future of the profession shines that much brighter. Both within Quebec and the rest of Canada, Normand’s influence and contributions have left a trail of friendship, accomplishment and a sense of destiny for the profession that has inspired and rallied his colleagues. I will miss him, his profession will miss him, but we are all that much richer to have had him as one of our own. Thank you for your friendship, your vision and your inspiring leadership, Normand; you will be forever in our hearts and memories.”
Dr. Stan Gorchynski
President, Canadian Chiropractic Association